Gorilla’s could be Extinct If Not Conserved for Future Generations

Gorilla’s could be Extinct If Not Conserved for Future Generations

Several factors often threaten the existence of the Mountain Gorilla’s thus their dwindling population such as disease, poaching, human population encroachment of their habitat the rain forests among others. Gorillas are open to same diseases which effect humans since they are closely related to humans with similar anatomic and physiological features. Gorillas live in small groups any exposure to any kind of illness affects the entire group which may fail to recover from the entire fall that’s why human contacts are restricted. All Gorilla trackers are instructed to keep a distance from the Gorilla’s. Most scary diseases include flue, Scabies which can quickly spread from group to group as families interact.

Poaching is another threat which has claimed many lives of gorillas in the jungle forest till present for example a while ago some European and American scientists and trophy hunters killed over 50 mountain gorillas which effected the population of the living apes today. Hunting is another problem because many Gorillas have been injured by hunters who go to jungle to hunt other wildlife life. The latest events shows that hunting of mountain gorillas in order to capture their young ones by corrupt dealers remains a threat for example an infant Gorilla was recovered outside Virunga national park in 2013 who was later the joined to other three rescued gorillas & orphan from poaching in Rumangabo for monitoring.

Population growth of the people living near the park is the worst of all threats since they both compete for the forest land. The people need land for farming, agriculture in order to support their families while Gorillas destroy the farm crops and also limit the local community from access the forest land. The only way to maintain gorilla habitat is to develop alternative economic activities that allow people to meet their daily needs, so that they see gorillas not as competitors, but as a means of improving their own situation. The regional conflict is another threat, changing climate, weak regional collaboration but me & you can change this if we try. With a population of less than a thousand Mountain gorillas remaining in the world today, a lot of conservation effort is needed in order to conserve the mountain Gorillas for the Future Generation.

Diany Fossey, Carl Akeley, George Schaller are the other great Gorilla conservationist who followed Robert & their work focused global attention on the troubles of gorillas. Still it’s that Effort which makes many travelers have wonderful lifetime memories every time they visit Uganda, Rwanda or DRC for Gorilla trekking adventures. We all agree that the above Conservationists did a great job in conserving the mountain gorillas without forgetting the local communities of Uganda especially around Bwindi forest and Mgahinga National park, Locals of Rwanda around and near the Volcanoes national park & the people of Democratic Republic of Congo (DRC). Each countries local community deserves a bonus for ensuring the survival of gorillas and also allowing the guests to access their reach jungle forest to trek the Gorillas. The National park staff like wardens and ranger guides has done a lot to ensure that the conservation rules can be maintained in all the three countries.

Several organizations have come up to conserve Gorillas and these work hand in hand with both the local communities and park management. They include the mountain Gorilla conservation fund (MGCF), international Gorilla conservation program (with programs in Rwanda, Uganda and Congo), Fauna & Flora international (only in Rwanda), Wildlife Wild places & forests (WWF) all over Africa, Rwanda development Board (RDB), Uganda wildlife Authority the main organization (UWA). There is a very big change unlike back then before 1902. According to the World Heritage Wildlife animals, the Gorillas where discovered on October 17th 1902 by Robert Von Beringe in Virunga mountains who was the first non-African to encounter the Mountain Gorilla stopping the hunting habitats which had driven the rare primates to the edge of their death. 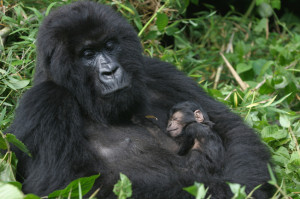